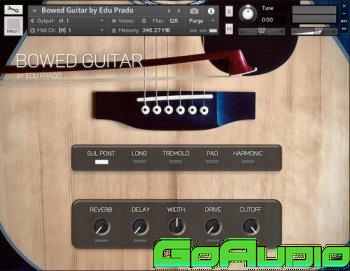 The Bowed Guitar is an extremely unique library, and, as the name suggests, it was created from playing an acoustic guitar with a cello bow.

The sul pont patch consists of the guitar being played with the cello bow really close to the nut, producing a similar effect as the sul ponticello technique used in bowed string instruments. This results in a more harsh and airy sound, producing different harmonic partials, giving also a more organic feel as the harmonics are constantly changing.

The pad patch is the most different from the others, as the sample is already processed to achieve a heavy pad sound. To create the pad, a sample from the sul pont patch was extremely stretched and layered with different octaves and harmonics.

The last patch features a bowed harmonics patch, where the sound of the bow hair sliding across the string can be clearly heard.

The sul pont, tremolo, and harmonic patches have a special feature: when played with high velocity a different sample is triggered, where the left and right channels are out of phase, creating a wide stereo effect, simulating two instruments playing and moving in the stereo field.

Please Note: The full version of Kontakt 5.5 or above is required. Not for Kontakt Player