Dear Reality’s state-of-the-art algorithms have been a mainstay of 3D audio production for years. Now, for the first time, their spatial processing treasure chest has been made available in an all-in-one plugin for your DAW: dearVR pro. Say goodbye to expensive middleware, unwieldy software bundles and complex routing schemes. All the tools you need to create stunning, immersive 3D audio for virtual reality (VR) and augmented reality (AR) video, films and games are included in dearVR pro’s powerful yet fast and intuitive interface.

Two modes of operation let you choose how to work. Simply drag your mouse around using the plugin’s graphical XYZ pad to position a track’s sound anywhere in a 3D soundstage—behind or in front of the listener, above or below their head, to the left or right, closer or farther away. Or use separate sliders for adjusting the sound’s elevation, azimuth and distance from the listener. dearVR pro provides 46 vivid virtual acoustic environments, featuring true to life 3D imaging and depth, in which to place an object’s sound and move it around in real time. Among the many selections to choose from are concert halls, car interiors, variously sized rooms, and a church, cellar, staircase, bathroom, booth, warehouse, arena, outdoor street and live stage. Each environment is instantly and independently recallable per plugin instance, letting you place each object’s sound in a different space.

You can change the shape, dimensions and texture of your selected virtual space using controls that adjust its size, damping, and balance of early reflections and diffuse reverb. In Realtime Auralization mode, turn six knobs to respectively adjust the distance from the listener of the four walls, ceiling and floor in your virtual space; as you move your sound around to match an onscreen object’s movement, the delay times and directions of arrival for early reflections bouncing off these virtual boundaries change—just like in real environments. An Occlusion control lets you adjust the sound of an object to realistically match its being blocked by another virtual object in line of sight to the listener. And if a track’s sound doesn’t move in perfect sync with its corresponding visual element, you can tweak its animation curve using separate scaling controls for azimuth and distance parameter ranges to make picture and sound match up flawlessly.

For those who don’t need all the firepower dearVR pro offers, a streamlined version of the plugin—dearVR music—is available for entry-level applications. But for professionals working in VR and AR who need no-compromise, state-of-the-art performance with all of the workflow advantages of a self-contained plugin, dearVR pro is the ultimate solution.

Below are some noticeable features which you’ll experience after Dear Reality dearVR pro free download.

•State-of-the-art processing allows any multitrack session to be mixed in 3D, delivering a true to life immersive soundscape with binaural or Ambisonic playback
•No ancillary software or external routing is required—all processors are contained in a single plugin
•Position and move an object’s sound in real time in a virtual 3D environment using a graphical XYZ pad or separate sliders for adjusting the sound’s azimuth, elevation and distance to the listener
•Includes 46 vivid virtual acoustic environments to choose from, each independently recallable per plugin instance
•Controls for virtual environments adjust their size; damping; balance of early reflections and diffuse reverb; and distance of walls, ceiling and floor to listener
•Powerful Realtime Auralization mode continually changes the delay times and directions of arrival for early reflections as you move an object’s sound around in its virtual space
•Occlusion control realistically adjusts the sound of an object being blocked by another virtual object in line of sight to the listener
•Separate controls scale parameter ranges for azimuth and distance to maintain perfect sync between audio and corresponding virtual objects in motion
•Outputs audio in eight different formats: 2-channel binaural (for 3D playback using standard headphones); 4-channel first order, 9-channel second order and 16-channel third order Ambisonics •output in either AmbiX or Furse Malham (FuMA) format; and 2D stereo 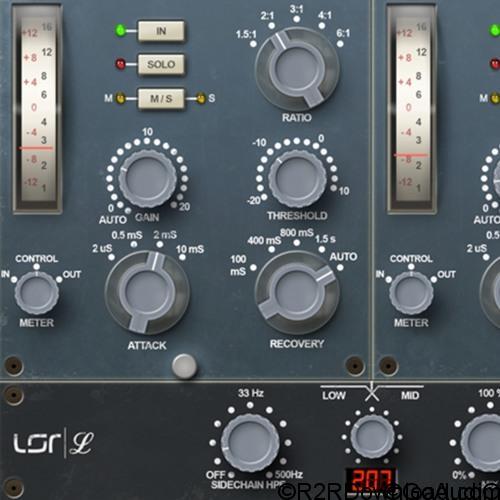 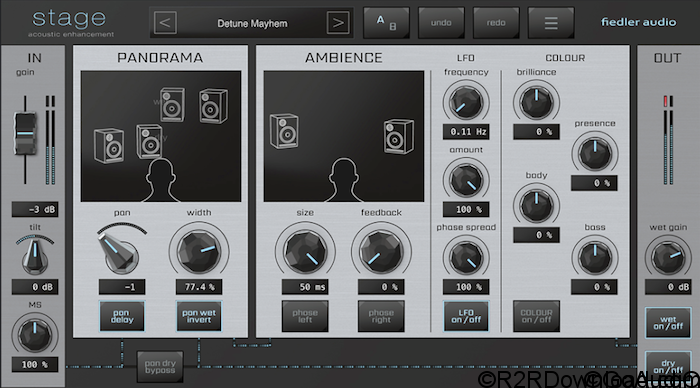