Our powerful groove engine has taken LA Modern Percussion to all new heights. Featuring four unique sequencer builds, dynamic step modulation, and the ability to assign individual drums to their own keys, you can create evolving, playable patterns. Watch the video above or preview the grooves to the right to learn more.

Audio Ollie teamed up with the legendary scoring mixer Alan Meyerson to bring you his iconic, distinctive percussion sound, heretofore unreplicable with the existing tools and libraries. To capture this aggressive, wide, and larger-than-life sound, we used the exact set up Alan does on his blockbuster projects — we brought in four of LA’s best percussionists to Warner Brothers Eastwood stage and followed his formula every step of the way, from the mic selection to the final mixes. The painstaking dedication to every last detail was well worth the effort! We are incredibly proud to introduce our new collaboration and flagship instrument–LA Modern Percussion.

LA Modern Percussion was designed to be tweaked, mangled, and customized by the creative user. With 15 mic options, a dedicated effects chain (modeled after Alan’s workflow), bus routing, and various patch types crafted to be stacked and layered, the creative possibilities are almost endless. By providing these basic building blocks, the stage is set to build and sculpt entirely unique drum sounds. By combining many different percussive sources, all with unique processing and humanization features such as looseness and random velocity, we’ve provided a massive set of creative content in the form of multis.

The user interface was built to maximize efficiency, and improve workflow. It includes features such as dual band AHDSR mods which are linked to high and low pass filters for surgical sound shaping, a preset system which allows you to save any of the UI settings, and advanced controls which can adjust the dynamic curve, transposition, and pitch of the instrument.

Alan Meyerson is undoubtedly one of the most iconic scoring mixers of our time. With credits including Gladiator, Blackhawk Down, The Blood Diamond, Transformers, Man of Steel, and countless others, his name has become synonymous with larger-than-life percussion sounds and modern film score. Based out of Hans Zimmer’s Remote Control Productions, Meyerson has been an integral part of that musical community which has heavily influenced the film score genre over the last 30 years. With his unique, aggressive aesthetic, he has helped to bring the rock & roll mentality into orchestral music production and has subsequently become one of the most sought after mixers in the world.

Warner Bros Eastwood stage is one of LA’s top recording venues for film score. With a large, yet controlled acoustic, this space is particularly well suited for percussion. Scores such as Mad Max Fury Road, Man of Steel, and Transformers–all of which are known for their iconic drums sounds–were recorded in this space, making it the obvious choice for LA Modern Percussion.

Dynamic Hits – These patches feature an average of 25 dynamic layers mapped across the keyboard from low to high. This unique approach has an extremely low CPU requirement which makes them ideal for layering.

Traditional Hits & Rolls – Your traditional percussion patch with up to 7 dynamics, 9 round robbins, and dynamic rolls controllable via mod wheel. All of the major ensemble types have a traditional hits & roll patch to complement the dynamic hits.

Fills – Small musical performances which were designed to be pieced together to create realistic energetic rhythms. The start times can be adjusted via keyswitch to further customize the fill patterns. 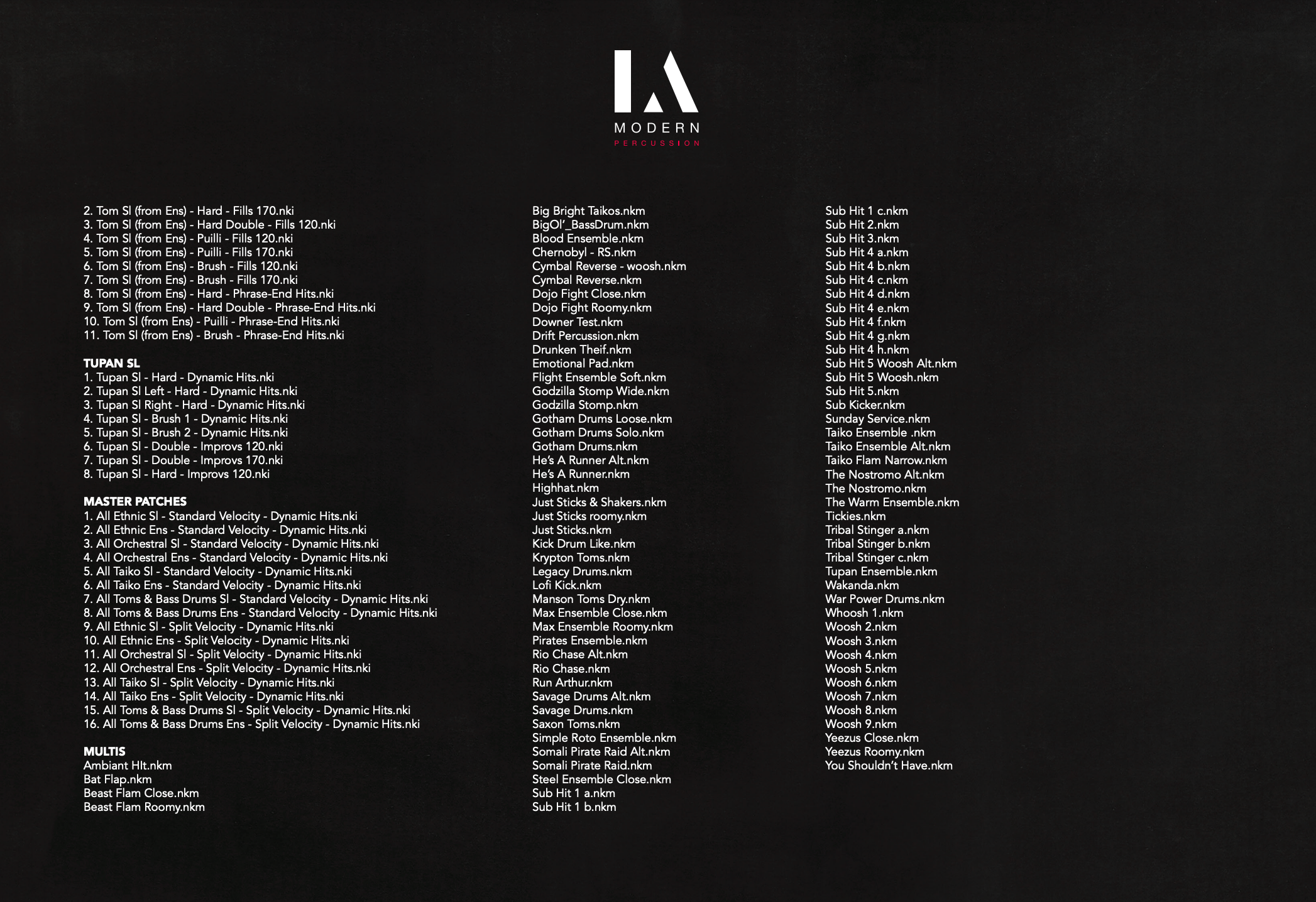 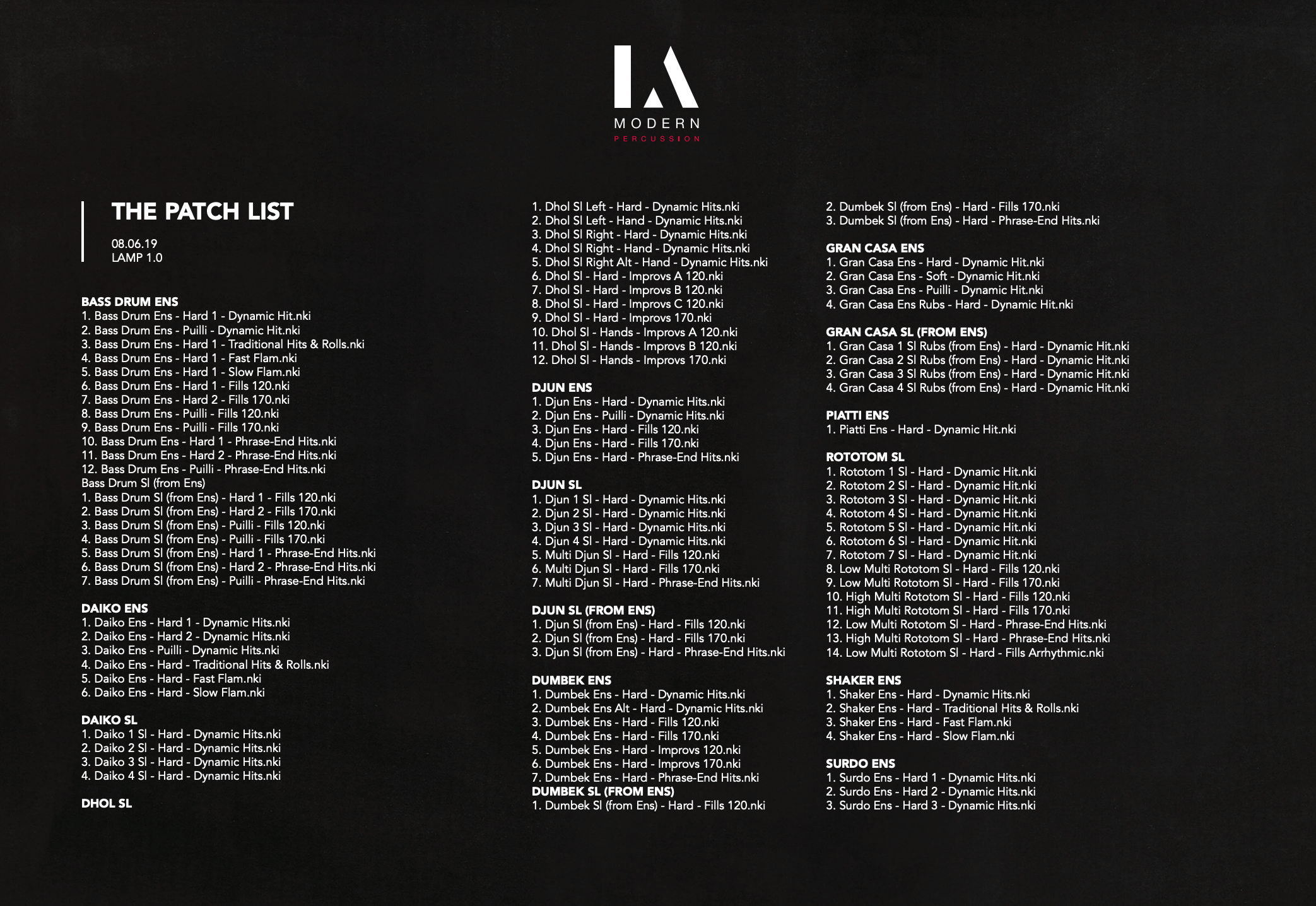 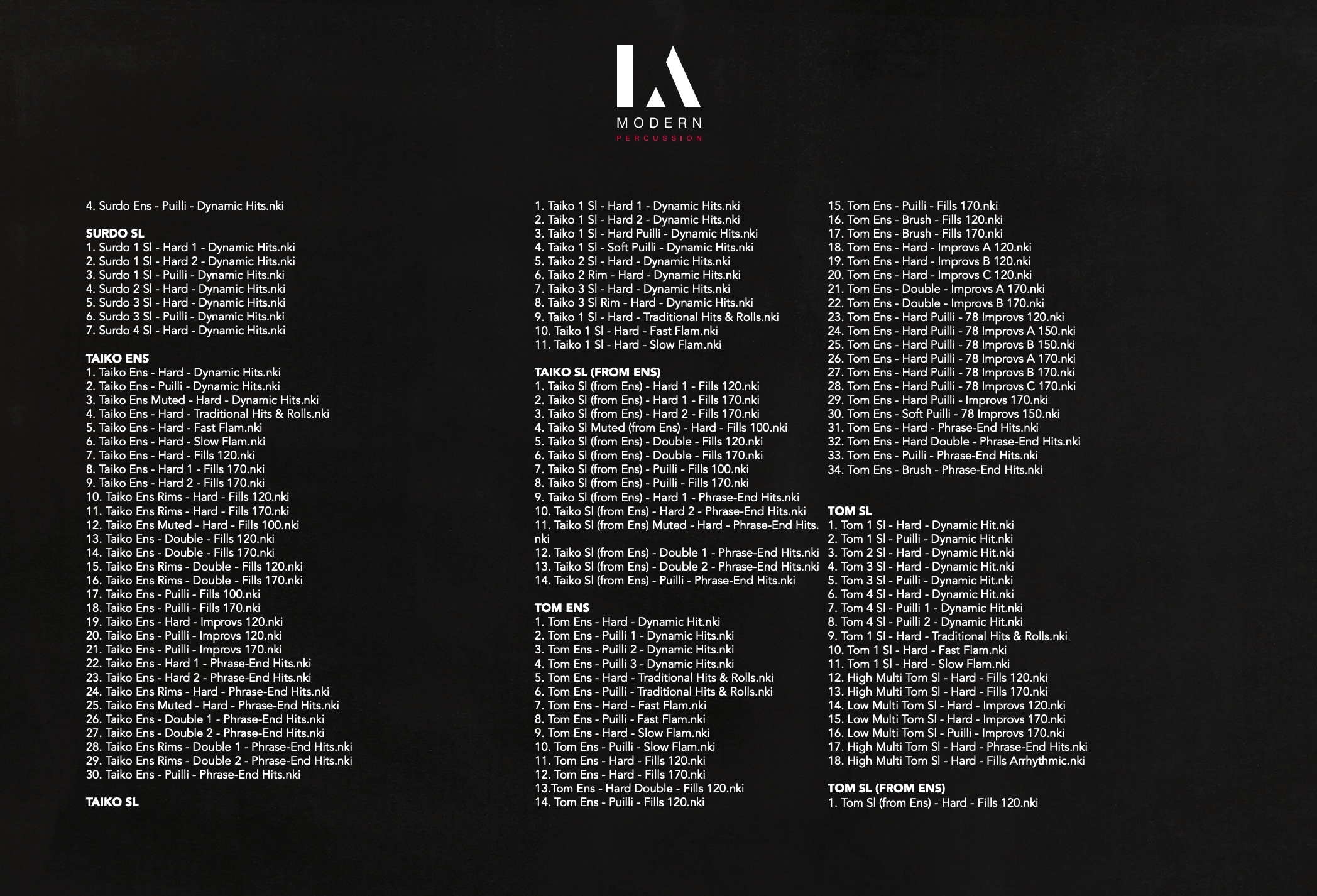